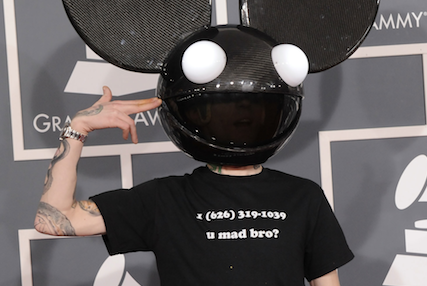 Considering Lady Gaga arrived at last year’s Grammy Awards in a freaking egg, this year’s red carpet fashion was extremely subdued by comparison. Deadmau5, like many dudes, showed up in a T-shirt. But an interesting T-shirt.

Once Grammy viewers got over the sight of a man with a giant, toothless, pupil-less mouse head stalking the red carpet wordlessly, they realized the electro guru, née Joel Zimmerman, was sporting a phone number with the words “U Mad Bro?” beneath it. Whose number? Naturally, the answer was available on Deadmau5’s Twitter account. After congratulating his fellow dance bro — “Congrats to @skrillex for the best remix grammy 🙂 can’t say I’m not proud!” — the producer tweeted his confession: Skrillex was about to be getting a lot of phone calls.

SPIN ranks the 2012 Grammys’ highs and lows! In photos!

As any normal person would do, Skrillex, née Sonny Moore, tried to turn on call-forwarding. Not to be defeated in his mega-pout, however, Deadmau5 revealed that he had thought about this prank an awful lot. We’re not sure what “one step ahead” meant, but it’s safe to say that Sonny had to deal with a lot of vibrations, good and bad, while tweeting from his seat during the broadcast.

In case you were wondering, Skrillex’s phone number, (626) 319-1039, only leads to a dead end (a full voicemail inbox), but we’re not worried about Sonny; if you win three awards, it’s the rule that people have to let you use their phone to call your mom. Or, at least that’s what we hear.