A solo album, 'Everybody's Brother,' and a new Goodie Mob album, 'Age Against the Machine,' are both 'coming soon' 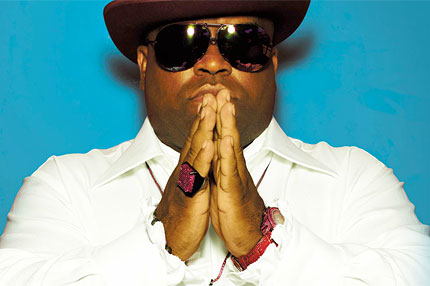 Cee Lo Green finally has the world’s attention. On Sunday night, the former Gnarls Barkley vocal powerhouse won a couple of Grammys for the retro-soul belter “Fool for You,” from his 2010 solo album The Lady Killer. The previous Sunday night, he donned a sparkly gospel-choir robe for the Super Bowl, the most widely viewed TV event in the history of ever. And now, the man known to millions as a peer of the guy from Maroon 5 on TV singing contest The Voice has revealed plans to release not one but two albums with titles virtually guaranteed to annoy anyone who has been following him longer than a typical NBC executive.

As Rap-Up.com points out, Cee Lo tweeted early this morning that both a new solo album and a new album with his hip-hop group Goodie Mob are “coming soon.” The solo album, using the naming conventions of his past releases, will be titled Cee Lo Green Is … Everybody’s Brother. The Goodie Mob album will be called Age Against the Machine. …We’ll wait.

According to Rap-Up, the Goodie Mob record was originally set to be titled, We Sell Drugs Too, which at least might’ve served as a provocative broadside against rap’s ongoing drug-trade obsession without being all sanctimonious and lame about it. Then again, the idea of a smiling Black man who is “everybody’s brother” has an extraordinarily complicated place in our nation’s tumultuous cultural history, of which Cee Lo is no doubt far more acutely aware than the rest of us. For now, let’s give this wildly talented performer the benefit of the doubt and trust he will use his powers for good, not stupid. We can’t all be born with Adam Levine’s cheekbones.

Listen to “Fool for You” below: