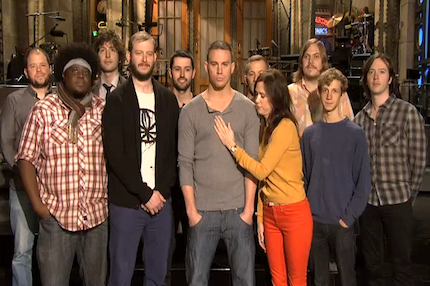 When Bon Iver finished up work on their self-titled sophomore effort a little over a year ago, frontman Justin Vernon and his crew had hopes for one song in particular. “It was a Christmas dream,” frontman Vernon laughs.”Maybe we can play Saturday Night Live and maybe we can play ‘Beth/Rest.’ That’s the scene.”

And when Vernon and his nine-member outfit take the stage at 30 Rock on Saturday night, the often-polarizing soft-rock closer will indeed comprise one half of his set list. The other song will be “Holocene,” the honeyed, far more straight-forward finger-picked beauty that’s garnered a Grammy nomination for Song of the Year.

According to Vernon, who was posted up with members of said crew in New York’s Woolworth Building bar for an (Elijah Wood-DJed!) event celebrating Bon Iver’s collaboration with Bushmills Thursday night, the connection between SNL and “Beth/Rest” go deeper: When team sound engineer (and Bushmills billboard star) Brian Joseph was tracking the song in late 2010, he was nudging saxophonist Colin Stetson to channel legendary Saturday Night Live Band tenor sax soloist Lenny Pickett as best he could. And as the band dug into rehearsal yesterday, worlds collided for a few seconds.

“We’re playing that song and I realize Lenny Pickett is five feet away from Colin, watching,” Vernon beams, breathless. “I realize people are going to hear it [on Saturday] and think it’s different. But it’s anthemic, it’s got Pickett-esque saxophone in it, and we feel confident in it. Whenever we listen to that song, we feel this extra… ‘Yes. We’re going to do this, motherfuckers.’ It’s not irony.”