Who Charted? Adele’s Stranglehold on No. 1 Reaches 15th Week 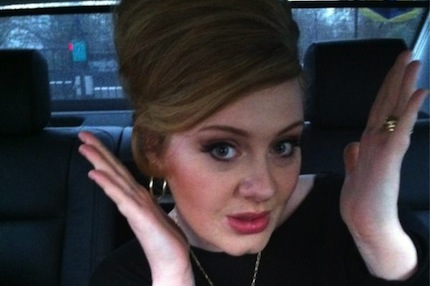 First! It’s a new year, but the same album sits atop the charts. Adele’s 21 entered its 15th week at No. 1 on the Billboard 200 with 124,000 copies sold, per Nielsen SoundScan. The mark puts the British singer one week away from matching the record of 16 weeks at the top of the charts, set by Titanic in 1998, and given the slow trickle of releases yesterday, she’ll probably do just that. Celine Dion’s heart will surely go on.

Notable Debut: In a scant season for new releases, SafetySuit’s These Times was the only new entry in the Top 50, selling 26,000 copies to land at No. 7. The Oklahoma band’s previous highest chart position was No. 173 in July 2009 for debut album Life Left to Go. Which might not accurately describe their new album’s future prospects in the Top 10.

Who Wouldn’t Give Up the Hot 100 Top Spot: Jason Mraz hit No. 1 on the Hot 100 with “I Won’t Give Up,” the first single from his upcoming fourth proper full-length. Mraz’s download sales count of 229,00 marks his best sales week since Christmas 2008, when his No. 3 Hot 100 hit “I’m Yours” sold 233,000. We saw this San Diego smoothie play live back when you could still smoke in bars, and after the show he offered us a Marlboro Red, which we accepted because we wanted to look cool, but not before we uttered, coolly, “Cowboy killers, huh?” Cool story, bro.