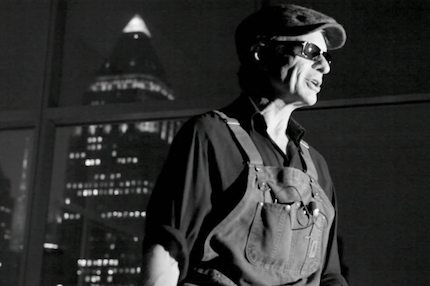 It’s been just under two weeks since we witnessed Van Halen being ridiculous 15 different ways at New Yorks’ Café Wha? and first laid our ears on Van Halen’s comeback single “Tattoo.” Just in case you felt the Dylanesque lyrics like “Swap Meet Sally, tramp stamp tat. Housewife to momshell, in the time it takes to get that new tattoo” needed further analysis, David Lee Roth has stepped up with a six-minute-long video discussing the genesis of the song, and his explanation is probably more entertaining than the track itself.

In the clip, which DLR sent along to the Van Halen News Desk, Roth, in his now-patented overalls, talks about the Elvis tattoo his uncle had that inspired the single’s opening lines, plus the evolution of Crayola crayons (“Explodo Red, great name for a color. I’m not even sure what color that actually is, I just know it’s a great name”) and how much the ink needle hurts. “That is a rite of passage, because it really forces you to consider what’s permanent to you. What is it you really want to remember,” ruminates Roth.

This video makes us long for the days when Diamond Dave enjoyed a short-lived stint as Howard Stern’s replacement after the shock jock ditched terrestrial radio for Sirius. Instead of iTunes exclusive bonus tracks or whatever VH is planning, deluxe copies of the band’s February 7 new album A Different Kind of Truth should come with an audio commentary that features Roth pontificating on the origins of the entire track list. Also, head to Blabbermouth and check out Roth’s incredible calligraphy skills on the “Tattoo” lyric sheet.

Bonus: Since we can’t embed this crazy amazing DLR video, we will leave you with this one: