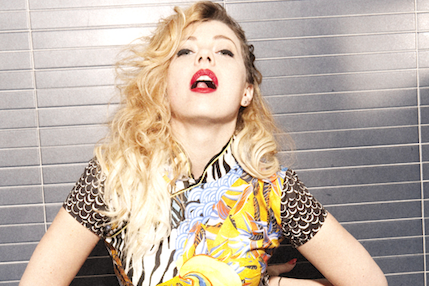 MNDR promised SPIN a song about Patty Hearst and MNDR has delivered: Latest single “#1 in Heaven” is about the critical moment when the kidnapped heiress began to sympathize with her captors. “The lyrics to the chorus are her words,” Amanda Warner tells SPIN. “After she was arrested for robbing a bank where someone was murdered, her only press statement was, ‘Tell them (my brothers and sisters) I am smiling and send my greetings.’ “

When seeking out a director for the “Heaven” video, Warner wanted to find someone who could maintain the political spirit of the track while introducing a pop sensibility. She wound up snagging an old pal who she calls “one of my favorite artists and musicians”: Cody Critcheloe from SSION. “We bounced ideas around and he had this amazing idea to build a manifesto with different archival footage, animation, and film techniques,” Warner says. “We also took inspiration from strong iconic women such as Jane Fonda, Wendy O Williams, and Valerie Solanas.”

While Warner was channeling the collective feminist power of some of history’s most fierce women, she was also aware there was only going to be one woman in the video — herself. “I really wanted this video to take the focus off of conventional ideas of ‘sexy’ or ‘pop,’ ” she tells SPIN, “so another really important part of this video was working with stylist Haley Wollens. She is absolutely amazing and was able to bring in looks that elevate the message in the video but also bring in style and pop music.” But perhaps more importantly, she adds, “And I really wanted a faux boy band.