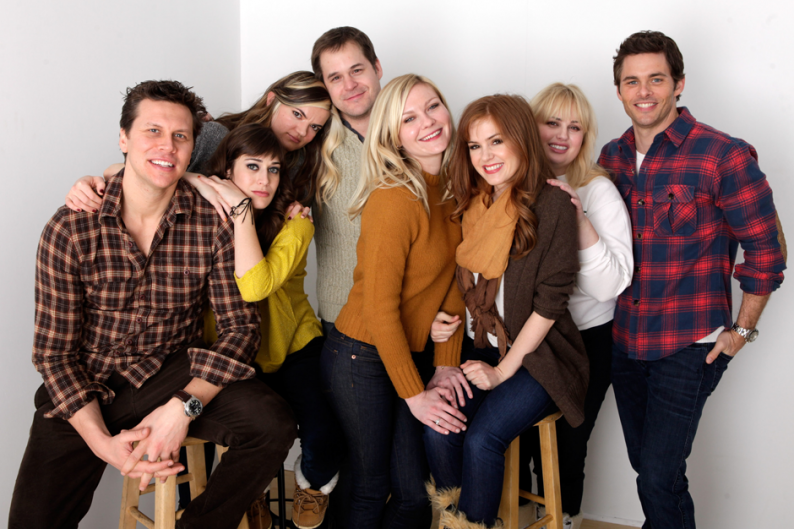 There’s always at least one film at Sundance that doesn’t quite fit in with the little-movies-that-can because it features a big name and attracts just about everybody, and this year that film is Bachelorette, which had its world premiere at the Eccles Theatre last night. Stars Kirsten Dunst, Lizzy Caplan, Rebel Wilson and James Marsden showed up for the late night screening, as well as Justin Long, Rashida Jones and coproducer Will Ferrell. Buzzed as the next Bridesmaids, the film is an adaptation of Leslye Headland’s venomous off-Broadway play and marks her directorial debut. As she took the stage to introduce the movie, she nervously veered into award speech territory by taking the opportunity to thank everyone without whom this film wouldn’t have happened, Ferrell among them.

First off, Bachelorette isn’t Bridesmaids II. Where cowriter Kristen Wiig wanted her female cast to be crude but, in the end, kind to one another, Bachelorette has more in common with Bad Teacher, freeing its characters from what Headland might consider obligatory niceties. As high school friends reunited for the wedding of the girl they once called Pigface (Bridesmaids’ Rebel Wilson), Dunst, Caplan and Isla Fisher snort cocaine, hurl insults at each other about their abortions and eating disorders, use nicknames like “cuntgina,” and say things like, “If you do any more coke, somebody’s dick is going to get sucked.” Fisher’s suicidal Katie is a particularly sad case — she’s so dumb that she could probably argue mental incapacity if accused of a crime — but all three women are spectacularly damaged. Though they suffer uneasy characterizations, Dunst is, for the most part, excellent as the controlling Regan, a competent friend whom you wouldn’t want as an enemy, although she’s treated as an alpha-bitch for reasons that don’t always make sense. It’s Caplan’s coked-up, chain-smoking Gena who has little respect for anything, which seems to stem from a scarring incident with her ex, Clyde (played by Caplan’s Party Down buddy Adam Scott). Their night-long adventure involves racing around to repair the bride’s torn wedding dress after Regan and Katie squeezed into it as a joke, along the way staining it with blood and various bodily fluids.

Apparently, the characters were even more base in the staged version. “I like dark plays, but I don’t like dark movies,” said Headland by way of explanation after the screening. Caplan chimed in to explain that she encouraged Headland, who was a former assistant to Harvey Weinstein before becoming a staff writer on Terriers, to make this movie after seeing it staged because “Too many movies relegate women to ‘Now don’t you boys misbehave!’ We were going to get to misbehave.” When the actresses were asked about the fat jokes in the film, Wilson initially deflected, “I’m really drunk right now and I need to go to the toilet. I was just excited to be in a movie with Kirsten Dunst because I love Bring It On.” Then the Australian comedian added that her costars hadn’t wanted to use the word Pigface during the read-through, but that she thought it was important they do so to gain sympathy for her character (Becky). Dunst and Caplan declined to comment.

Headland was excited by one audience member’s comparison to John Hughes, saying she had wanted to dedicate the movie to the iconic director but “didn’t want him to roll over in his grave.” And for all the deliberate pop-cultural references in Bachelorette — My So-Called Life, 90210, Fast Times at Ridgemont High — Hughes’ work doesn’t easily come to mind. Headland is attempting something different here by writing women who aren’t particularly redeemable, something that would never be said about Molly Ringwald, and it will be interesting to see if audiences embrace this version of equality.