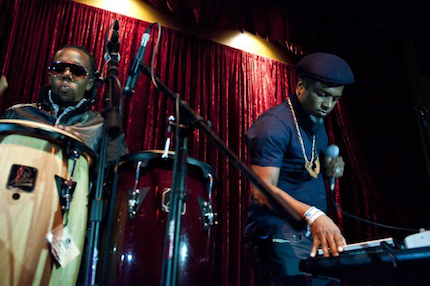 Sub Pop hip-hopper and SPIN Top 50 albums of 2011 honoree Shabazz Palaces dropped a fittingly stuttery video clip for the ellipsis-heavy “Are You… Can You… Were You? (Felt)” today. The video, directed by Seattle visual artist Maikoiyo Alley-Barnes, is chock-full of spastic floral imagery, long shots of African tribal sculptures, and the protagonist’s problems with other people: namely, this girl on a bike gets nearly hit by Shabazz in his Benz while biking, then returns home to her mother’s (we think?) disapproval of her wardrobe. The conversation flickers between English and a foreign language (we should probably brush up our Rosetta Stone), but the body language is the focus in the clip — even more so as the visuals conclude with a stack of nude portraits upstairs.