See the War on Drugs Launch ‘Baby Missiles’ With ?uestlove on ‘Fallon’ 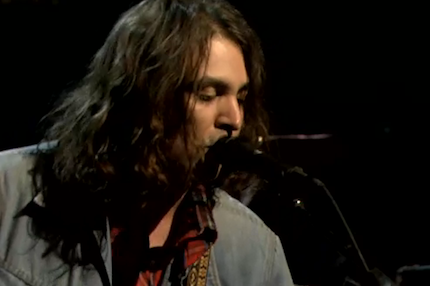 The War on Drugs’ Slave Ambient, feints toward psyched-out obscurity, from its blurry cover art to its similarly blurred production, but it’s a collection of all-American rock’n’roll road anthems at heart. So it’s not actually such a left turn for the group to collaborate with an eclectic-minded hip-hop drummer, but that didn’t make it any less thrilling to see these spacey Philly roots-rockers team up with an actual member of the Roots, fellow Philly native ?uestlove, last night on Late Night With Jimmy Fallon.

Making their TV debut, shaggy-haired singer-guitarist Adam Granduciel and his bandmates performed catchy, concise “Baby Missiles,” a holdover from 2010’s Future Weather, rather than most recent single “Come to the City.” The song’s TV-ready three-and-a-half-minute length was surely a deciding factor, but with its easy rambling highway imagery, it’s still one of the band’s most immediate cuts. The acid-washed guitar breaks and perpetual-motion drumbeats go hand in hand with the folkie harmonica solo, plus a frontier vision of America that goes back to the Modern Lovers’ proto-punk gem “Roadrunner” and, before it, the iconic Route 66. “I don’t mind when all the pioneers go soft on me,” Granduciel sings. He’s got a point.

I Was There: check out snapshots from the War on Drugs’ personal tour album.

See when the War on Drugs drift through your city by perusing their full slate of tour dates over on label Secretly Canadian’s website. And don’t forget Kurt Vile, a former member of the War on Drugs, had one of SPIN’S 50 Best Albums of 2011 with Smoke Ring for My Halo.

Also on last night’s Fallon, Questo and yet another product of Philly, Tina Fey, settled their beef the only way people from the City of Brotherly Love apparently know how. Spoiler, it involves a hoagie. So it was Philadelphia all over last night on Fallon, right down to a Wawa reference, but at least the 30 Rock maestro didn’t key the Roots man’s car.