See Foo Fighters Conquer the World in ‘These Days’

Wistful clip traces band's onstage and offstage antics Down Under 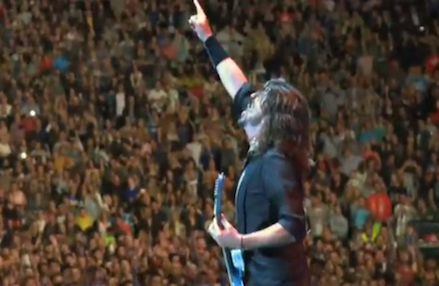 Dave Grohl and Foo Fighters only have a couple of festival dates — and a Grammy TV performance — left on the schedule after a whirlwind tour that took the arena-tested rockers around the world (read our review of the tour’s Minnesota kickoff). If you can’t make it to New Orleans Jazz Fest or Bamboozle, the video for midtempo Wasting Light anthem “These Days” might be the next best thing.

As Foo Fighters move from delicate verses, kept brawny by the heavy rhythm section, to a full-throated, pedal-to-the-metal chorus, the video shows footage from the band’s tour of Australia and New Zealand. Shots of Grohl and the guys performing in front of astonishingly huge stadium audiences switch off with behind-the-scenes clips: getting ready to head out, watching the post-show clean up, and so on.

During the quiet, audience-singalong bit, Grohl even mouths “OMG!” Which, funny, is what we always say about another song written by a long-haired dude called “These Days” — but this one helped the Butch Vig-produced Wasting Light charm our hearts on its way to a spot among SPIN’s 50 Best Albums of 2011.