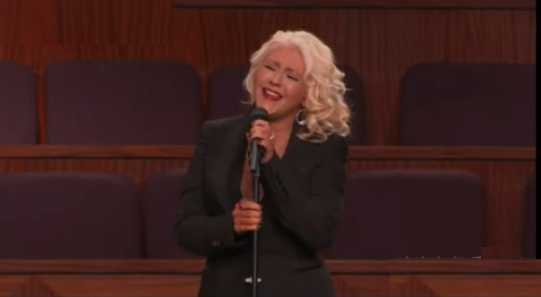 Mourners gathered in Gardena, California, on Saturday for the funeral of Etta James, who died last week at age 73. As CNN reports, the Rev. Al Sharpton recited personal letter from President Barack Obama, who praised the late R&B powerhouse as someone who “transcended genres” and would above all be “remembered for her voice.” Stevie Wonder performed “Shelter in the Rain” and “The Lord’s Prayer.” Christina Aguilera also paid tribute to her hero with an emotional rendition of James’ signature song, “At Last,” which you can watch below. “There’s a line in this song that says, ‘I found a dream that I could speak to,’ ” Aguilera introduced the tune, saying she’d included it in the set list of every show she’d sung since embarking on world tours over a decade ago. “And for me that dream, all my life, has been Etta James.”