Withdrawal has kicked in for fans who just had the weekend of their lives partying with Weezer, Sebadoh, the Antlers, and more 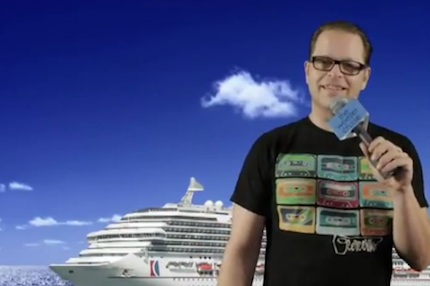 Weezer superfans are currently recovering from their weekend in Heaven, otherwise known as the 2012 Weezer Cruise. The four-night excursion, which sailed from Miami to Cozumel January 19-23, featured a clout-wielding lineup of classic and contemporary indie acts, including Sebadoh, Dinosaur Jr., and Wavves.

Unsurprisingly, it hasn’t even taken cruise-goers 48 hours to unpack and upload their video footage from the wonderland grown-up summer camp that featured flip cup, bellyflop, and cannonball contests with supporting acts like the Antlers and the Knocks; karaoke, prom nights, bingo tournaments and game shows; and multiple Weezer appearances, including a live reading from Rivers’The Pinkerton Diaries andtop-to-bottom performances of Pinkerton and The Blue Album.

Here’s what the sunburned masses have given us so far:

The “Jr. Rocker Gets His Dance On at the Ozma Set” Video:
The “Rivers Cuomo is Really Nice to a Fan Before Playing ‘Undone'” Video: