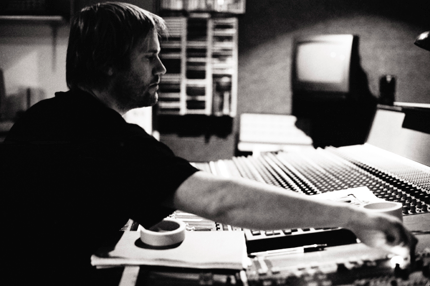 Today, Portishead’s Geoff Barrow’s kindly tweet-dropped a new streaming sampler featuring recent and upcoming releases from his eclectic Invada Records roster, including two new tracks from Barrow’s own woozy side-project, Beak>. Touted as a taste of the label’s 2012 offerings, the mix features no shortage of Barrow side-hustles including the sludgy “Yatton” from Beak>’s anticipated sophomore album to a disco-infused cover of Chromatics’ “In the City” by the Beak>-backed journalist-turned-musician, Anika.

The comp begins with a slow-burning atmospheric track from DROKK, a new mystery project by Barrow and composer Ben Salisbury, the first song from a forthcoming album inspired by Mega City One, the fictional metropolis from the Judge Dredd comic book series. Katalyst, a producer for Quaker, Barrow’s hip-hop mega group of 35-plus members, rounds out the mix with “Your Beats Smell of Paco Rabanne,” a mind-boggling 4-minute-25-second collage of contrasting tempo and textures (there’s even a banjo floating in the middle for a few seconds).

Beak> Approach the Limits of Their Steely Minimalism on >>>