No Age Call Out Kings of Leon Over T-Shirt Design

't shirt designs by the kings of originality... looking good' 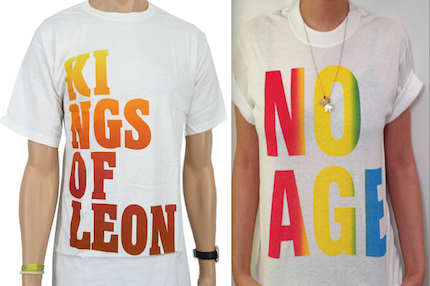 It’s a modern-day tale of David vs. Goliath. Only in this version, Goliath is a blockbuster arena rock band selling T-shirts that look similar to the ones David sells and David has a blogspot instead of a slingshot. Los Angeles noise-punk duo No Age have suggested Tennessee titans Kings of Leon ripped off their T-shirt design. A post last night on No Age’s blog shows two images of Kings of Leon T-shirts beneath the title “wait, what?” The post reads, “t shirt designs by the kings of originality… looking good.”

The L-shaped band name design on Kings of Leon’s shirts does appear resemble some T-shirts sold by No Age, whose most recent album Everything in Between made SPIN’s 40 Best Albums of 2010. But to be fair, neither of these guys invented the idea of writing out your band’s name on a T-shirt.

In Kings of Leon’s defense, the offending T-shirts don’t appear on the band’s online store, though a Google search reveals they aren’t just some figment of No Age’s fevered imagination. Kings of Leon’s members are prolific Twitter users, but they don’t appear to have weighed in on the blog post yet. The band has been relatively quiet since wrapping up its partly canceled tour (and releasing the Talahina Sky documentary).

Not convinced David was selling the T-shirts before Goliath? Check out this 2007 blog post showing the design in its natural habitat, at the merch table for a No Age show with electronic savant and later No Deachunter co-conspirator Dan Deacon. (As a bonus, there’s an old photo of fellow gig mate John Maus, the man responsible for last year’s chillwave-defying We Must Be the Pitiless Censors of Ourselves.) According to Amazon, Kings of Leon’s T-shirt didn’t become available from the online retailer’s U.K. store until January 2009. Worst of all, we’re pretty sure Kings of Leon have never toured with Dan Deacon or John Maus.