She also sings about taking acid while the world ends 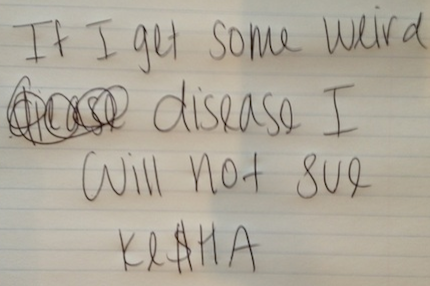 Of all the past year’s collaborations involving critically acclaimed underground-rock elder statesmen and a second act whose presence renders the whole project immediately blog-worthy, the most artistically intriguing have usually come from the Flaming Lips. In March, Oklahoma City’s finest weirdos released a suitably wigged-out EP with chillwave alumni Neon Indian. Last month, they recorded a four-song EP with their New Year’s Eve co-headliners, Yoko Ono and her Plastic Ono Band. Frontman Wayne Coyne has said collaborations also in the can with Bon Iver, Nick Cave, and Edward Sharpe.

Now another of the Lips’ hoped-for collaborations has come to fruition, and it involves none other than pop’s basement-party princess, Ke$ha. Idolator points to a series of tweets from Coyne and the “Sleazy” singer-rapper indicating that all sorts of insanity might be taking place in the Lips’ studio. A finger dips into gold glitter while the Beatles’ “Cold Turkey” plays off-camera! White powder is lined up net to a dollar bill (“crushed up TUMS,” tweets Ke$ha, “that wayne is snorting for his diarrhea”)! And Ke$ha belts out some skewed psych-pop ditties, including one that, per Coyne, is “about taking acid as the world ends” (which significantly changes the meaning of Ke$ha’s Britney co-write last year). Coyne also allegedly forced Ke$ha to “bark like a dog.”

Tweets Coyne, “She’s crazy.. But shit!!!!she can really fuckin SING!!!” Both facts should be obvious to anyone who heard Ke$ha’s surprisingly unadorned Bob Dylan cover, out tomorrow on the Chimes of Freedom benefit compilation. As for Ke$ha’s own upcoming sophomore album, there’s no official release date yet — she did tell an interviewer last September that “May sounds about right” — but her experience with the Lips just might boost the bizarreness levels. It can’t lower them, right?