'Love Interruption' is our first taste of April's 'Blunderbuss' 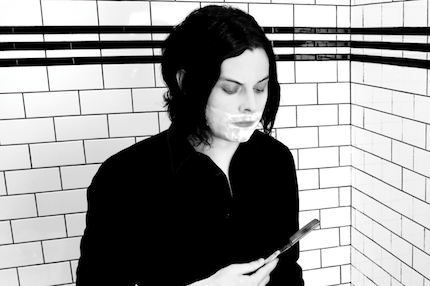 Well, it’s not jazz fusion, but it’s still surprising. This afternoon, “Love Interruption,” the first single from Jack White’s upcoming solo debut, Blunderbuss, was posted on jackwhiteiii.com and the song — built on a mellow, warm keyboard part and chunky acoustic guitar chording — is a nice departure from the thunderous rock that is Mr. White’s trademark.

As far as Jack White projects go, “Love Interruption” is maybe closest to the groovy classic-rock steeze of the Raconteurs (in their milder moments) than it is to the minimalism of the White Stripes or gothic blues psychodrama of Dead Weather. The lyrics are far from comforting, though, as White, doubled by a female backing vocalist, sings a country-soul melody, declaiming that he wants love to “walk right up and bite me”; “split my mouth right open”; and “Stick a knife inside me,” among other discombobulating acts.

You can pre-order the 7″ single, backed with non-album B-side “Machine Gun Silhouette” now, ahead of its February 7 release. The digital version of the track is available starting tonight at 12 AM EST.

Recorded at White’s Third Man studio in Nashville, Blunderbuss, a joint Third Man/Columbia release, is out April 24. It will likely not contain any jazz fusion.