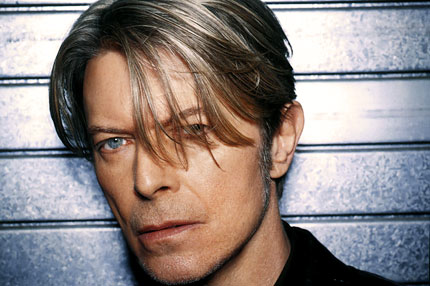 Yesterday, David Bowie turned 65 and the Internet rejoiced at having a legitimate (rather than totally fabricated) reason to write stories about the Thin White Duke. Our contribution? A January 1974 AP story that notes Bowie has been included on Mr. Blackwell’s list of the 10 worst-dressed women of ’73. The fashion guru described the rocker as “a cross between Joan Crawford and Marlene Dietrich doing a glitter revival of ‘New Faces.’ ” Bonus: Watch Billy Corgan join Bowie at New York’s Madison Square Garden for his 50th birthday concert below.

• British artist Ed Chapman made a mosaic of Bowie’s face called “Pin Up” that is reportedly worth £4,000.

• Flavorwire compiled a gallery of shots of Bowie doing normal stuff like bowling and dining on airplane food.

• Slicing Up Eyeballs dug up eight full Bowie live shows including a two-hour set from Japan’s Tokyo Dome in 1990 and a 40-minute gig at Germany’s Beat Club from 1978.

• Entertainment Weekly reported on the graphic novel prequel to Labyrinth, Jim Henson’s awesome 1986 film starring Bowie. “The budget to get Bowie to do one song would be the budget of all the books,” Archaia editor-in-chief Stephen Christy told the magazine, “but we’re talking to him to at least get his blessing or maybe an introduction or something.”

• Rolling Stone asked fans to test their Bowie knowledge in a quiz.

• The Mirror compiled 65 “crazy facts and bizarre myths” about the star. But since this is the Mirror, this is likely a list of 64 bizarre myths and one fact.

• While some fans begged Bowie to return, the Guardian’s Alexis Petridis wrote an essay explaining why the singer’s semi-retirement makes perfect sense.