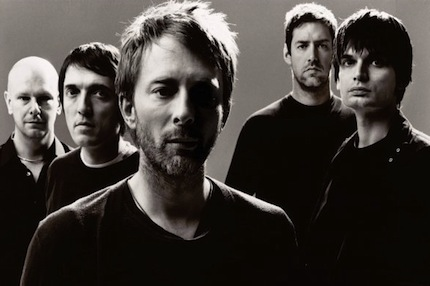 Yes, we know, people have been coming out of the online woodwork lately with “lost music” by the moody kings of British art rock, but some purported early Radiohead demos are more credible than others. “Fat Girl” and “Fragile Friend” are the latest tracks to emerge from what seem to be mid-1980s recordings by the members of Radiohead, then performing as On a Friday. They follow the previously leaked tracks “Everybody Knows” and “Girl (in the Purple Dress),” and they appear far far more likely to be legit than the so-called ’90s demo that leaked last month (and was later revealed as a hoax).

According to Radiohead fan site At Ease, On a Friday recorded “Fat Girl” at their Oxfordshire boarding school before Jonny Greenwood became the group’s guitarist. The sound of this one is basically Bono-fronts-the-Smiths, right down to its bombastically croon, Northern soul shimmy, and catty, woman-unfriendly title phrase. “Fragile Friend,” also attributed to On a Friday, is less recognizably Radiohead, with a yelping vocal, horns, and bit of a twang — “Don’t let me down,” the singer croons in a falsetto that might well be Thom Yorke’s, though who knows.

In other Radiohead news, the band sold more vinyl albums in 2011 than any other artist tracked by Nielsen SoundScan. Of the record 3.9 million vinyl copies of albums sold last year, 64,000 of them were by Radiohead, including 20,800 copies of The King of Limbs (though probably not including the deluxe “Newspaper Albums” the band sold on hits own). These newest demos are definitely not ready to be pressed up on 180-gram vinyl, we’re sorry.