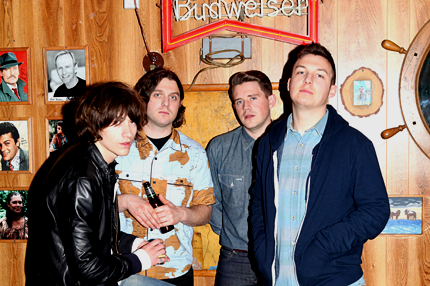 On last year’s Suck It and See, Alex Turner and the boys gave the impression they had outgrown the U.K. and U.S. charts alike: They’d moved on from both their early youthful exuberance and their later sludgy Josh Homme phase to revel in rich, vibrant lyricism and classicist fuzz-guitar tunefulness. It was like they didn’t care whether the masses “got it” or not. A rain-soaked Lollapalooza crowd ate it up anyway.

As for Kathleen Brien, her On a Mission (one of SPIN’s 20 Best Pop Albums of 2011) could hardly have been more deeply invested in current trends. Groomed to be a star at the same Brit School as Amy Winehouse and Adele, Katy B sings like someone who’d rather be Rihanna than Dusty Springfield. And she surrounds her imperious club hooks with the subwoofer-wobbling electronic strains of dubstep, the genre that overtook pop music like no other last year — even finally conquering the States, thanks to everyone from Britney Spears to Skrillex.

Arctic Monkeys’ cover is revealing for both sides. A restrained Merseybeat-meets-Morricone shuffler, with (as Stereogum points out) a guitar lick nicked from Johnny Kid & the Pirates’ “Shakin’ All Over,” the Monkeys’ “Katy on a Mission” take shows it’s not necessarily Turner’s songwriting that’s oblique or retro — their style of arrangements could make almost anything sound like an elusive garage-rock nugget. We haven’t met any Katy B haters yet, but the new version also underscores that her best tracks work not only by co-opting current trends, but also by putting those womp-womps and island-robot coos over great, old-fashioned songcraft. Whatever you say they are, that’s what Arctic Monkeys and Katy B aren’t.