Band seems to be celebrating 24th anniversary of Ritz concert 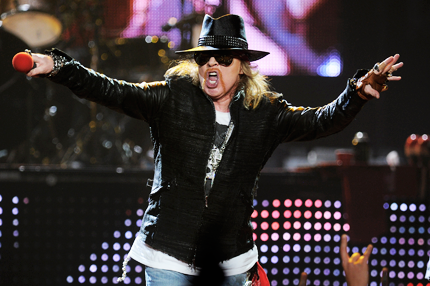 Axl Rose spends a giant chunk of Guns N’ Roses’ arena shows running to a small curtained off area at the far back of the stage every chance he gets. Will he be able to pull that mysterious move off in front of a smaller club audience? We’re about to find out! For the first time since a few surprise fashion week appearances in 2010, Guns N’ Roses are playing clubs!

The band announced six shows (“so far,” per a press release) today: A February 10 date at New York City’s Roseland Ballroom, followed two days later by a show at Terminal 5, and a February 15 show at Webster Hall, which the band is rebranding as “The Ritz” for the night as a nod to the February 1988 MTV show the original lineup played to great acclaim. February 19 they’ll play Chicago’s House of Blues, and February 23 they’re booked at Silver Spring, Maryland’s Fillmore. They’ll return to New Jersey — where SPIN saw Axl trot offstage 29 times — for a February 24 show at Atlantic City’s House of Blues.

GN’R will be inducted into the Rock and Roll Hall of Fame on April 5 in Cleveland. There’s still no word who exactly will show up to the ceremony from the original lineup, but people sure do love to speculate about that.