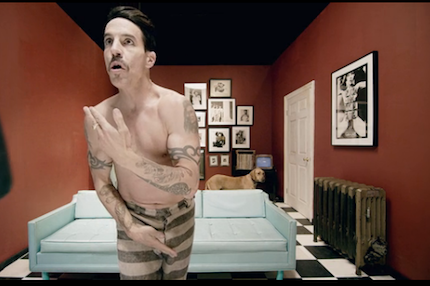 A couple of weeks ago, Red Hot Chili Peppers announced they would be postponing a tour due to their frontman’s extremely painful-sounding foot injuries. Luckily, Anthony Kiedis must’ve still been in fine funk-rock fettle when the Californicationers shot their latest video, because their new “Look Around” clip (via Spinner) appears to show four healthy Chili Peppers.

“Look Around,” from last year’s I’m With You (which SPIN called “one of the band’s most intuitive”) is a sleazy, futuristic strip-club strut with plenty of the Chili Peppers’ signatures: an enviably limber Flea bass line, punchy yet spacey electric guitars, and Kiedis doing that hiccupy quasi-rap “what I’ve got you’ve got to get it put it in you” thing on the breakdown. In other words, not a bad look!

Befitting the song’s title, the video creates the illusion the viewer’s head is spinning, as it pans between shots of the band members in four different rooms (bonus points if you get the reference in our headline). Kiedis’ includes a dog and a clearly frightened child (Kiedis’ son, Everly Bear) while Chad Smith drums in the bathroom (sitting on the throne), Flea half-nakedly cavorts with a half-naked woman, and guitarist Josh Klinghoffer busts out his solo, well, solo, in a sparsely decorated space.

Though the band’s tour has been postponed, the show must go on — and on, because they’ve recently added a whole bunch more tour dates. Check out the full North America schedule below, and keep in mind the group says even more dates are on the way: