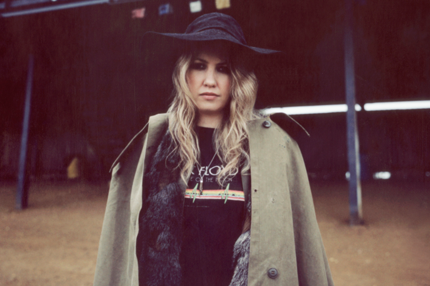 There’s truth in the title of Ladyhawke’s new album. “It’s called Anxiety because it came from a really difficult place,” explains the New Zealand pop-rock singer, born Phillipa “Pip” Brown. “I’d been living in this touring bubble for two years after releasing my first album [2008’s Ladyhawke] and then suddenly I had to write a second album. I was under a lot of strain.”

Not that anyone’s second album is supposed to come easily. “Of course I know that,” says Brown, laughing, “especially because people kept telling me!”

“Black White & Blue,” the first single from Anxiety, suggests that Ladyhawke does well with pressure. Fans of her first album will recognize singer-multi-instrumentalist’s flair for dramatic, catchy pop melodies and breathy, delivery. But the debut’s ’80s-derived synth hooks have been replaced by an emphasis on over-saturated guitars and a heavier, more rock-y beat. Those latter elements are amped up on a remix by up-and-coming British rock duo the Big Pink, which we’ve got for you as a free download.

“My passion for the guitar never went away,” says Brown in regard to her new sonic direction. “When I was a teenager I listened to a lot of Led Zeppelin and Black Sabbath and then I got into Smashing Pumpkins and Nirvana. So I tried to think of Anxiety as a collision between the ’60s and ’90s. Of course,” she continues, “it came out sounding like neither!”