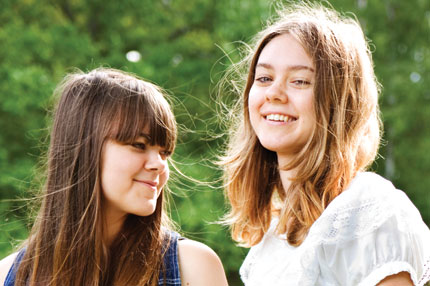 On their upcoming sophomore effort, The Lion’s Roar, due out January 24, Klara and Johanna Söderberg of Swedish sister duo First Aid Kit prove that their 2010 debut, The Big Black and the Blue wasn’t a one-off success. In fact, new songs like the silvery “Emmylou” demonstrate the Söderbergs’ knack for beautiful, close-harmony folk remains wholly undiminished.

Full of classic country and folk overtones, The Lion’s Roar, produced by Bright Eyes’ Mike Mogis, places the sisters firmly in the lineage of close-harmony family acts — a tradition of which they’re proudly aware. “Families have a way of singing that’s impossible to copy,” says Johanna. “It’s an amazing gift.” Below, the two shared some of their favorites.

The Carter Family
Klara I’m reading a biography of them right now and it’s obvious they were one of the founders of country genre. Sara Carter was maybe the first woman that was the center of a band — she was the main vocalist, not A.P. Carter. That’s really awesome.
Johanna There’s something about their recordings that’s so simple and very lo-fi — it makes me feel like I’m in the room hearing them. It’s very special. They also inspired me to buy an autoharp!
Klara My favorite song of theirs is “Will You Miss Me When I’m Gone?” It’s kind of spooky now because they are gone.
Johanna It’s like they’re singing from the grave.

The Louvin Brothers
Johanna We were compared to them a lot. That’s how we found out about [Charlie and Ira Louvin]. I can hear a similar technique. We both sing very loud. I love their voices so much. They’re very Christian — when they sing “Satan Is Real” they make you believe it! That whole album [Satan Is Real] is really creepy.
Klara It also has one of the best covers in the history of music.
Johanna They have a great song called “Pitfall” where they use harmonies in a creative way. You don’t really know who’s singing the lead. They sing in harmony for the whole song, not just the chorus. We’d love to do more of that.

The Blue Sky Boys
Johanna We found out about them recently. [Earl and Bill Bolick] are a brother duo, kind of like the Louvin Brothers. They even do some of the same songs as the Louvins. They were both popular in the ’50s and ’60s.
Klara How did you find them?
Johanna Again because someone said that we sounded like them! That’s usually how I find stuff. The Blue Sky Boys have this song “Where the Soul of Man Never Dies.” It’s really beautiful. Before we heard this kind of sibling harmony we weren’t really aware of what we were doing. Songs like this helped us realize what’s so special about it.

The Everly Brothers
Johanna I like everything they did. We’ve been listening to them since we were kids.
Klara Yeah, our parents listened to them, like a lot of people’s parents. My favorite my song is “Take a Message to Mary.”
Johanna I like Phil and Don Everly equally. They don’t get along, I think. A lot of brothers never get along. It’s terrible.
Klara I heard that when they recorded their songs they’d take each brother them into a separate room and tell them that their part was the lead melody. That changed the way they approached the singing. It’s a cool idea.
Johanna We like to see each other when we sing in the studio.
Klara When wethe new record we had a screen between us. We couldn’t really see each other, but we knew that we both were there. It’s a feeling.

Jim & Jesse
Klara They’re one of the few brothers that actually stayed friends! They didn’t have a phase where they didn’t talk to each other. In that way they’re our role models. We think they’re awesome. They did a lot of stuff in the ’70s. They kept on until one of the brothers [Jim] died a few years ago/>
Johanna The also sound like the Louvin Brothers. They do a cover of “When I Stop Dreaming” that I think is better than the Louvin Brothers version.
Klara No!
Johanna I prefer it.
Klara Jesse has this incredible voice. It’s really unique.
Johanna You have a little crush on Jesse.

The Roches
Klara We’d never heard of them when our last record came out. But then a lot of people compared us to them too, so we were like, “If everybody says we sound so much like them we should probably hear them.” These sisters — their vocal range is incredible.
Johanna They can go so low and so high. It can sound really weird but I like it. They do these crazy vocal acrobatics.
Klara But in a tasteful way.
Johanna “Hammond Song” is by far their best song.

The Secret Sisters
Klara We heard them when we doing some recording with Jack White in Nashville. [Secret Sisters bandmantes Laura and Lydia Rogers] also recorded a couple songs with him there that were really, really great.
Johanna Jack played it for us in the studio. He was putting the pressure on! We had to match it. They did a version of “Big River” by Johnny Cash for him.
Klara I think it was more that he was just excited about their music. T-Bone Burnett [executive] produced their first record [2010’s Discovery].
Johanna They have a laid-back kind of ’50s sound. Kind of like the Everly Brothers in a way. “Tennessee Me” is a great song of theirs.