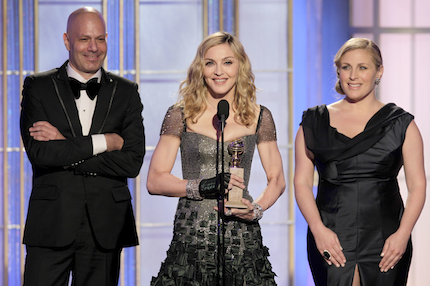 Elton John and his husband David Furnish were sore nominees and sore losers at last weekend’s Golden Globe Awards. Before the show began, John pegged Madonna’s odds of defeating him for Best Song at no “fucking chance.” Then, when she did beat him (ahem), Furnish published the unfriendly Facebook comment, “Madonna winning Best Original Song truly shows how these awards have nothing to do with merit. Her acceptance speech was embarrassing in its narcissism. And her critisism [sic] of Gaga shows how desperate she really is.”

The couple picked up a surprising amount of bad press for their behavior, leading Furnish to return to Facebook to write, “Wow! What a tempest in a teapot. My comments regarding The Golden Globes have been blown way out of proportion. My passion for our film ‘Gnomeo & Juliet’ and belief in Elton’s song really got my emotional juices going. But I must say for the record that I do believe Madonna is a great artist, and that Elton and I wish her all the best for next week’s premiere of the film ‘W.E.’ “

Well, then, surely that takes care of it! Except nowhere in this little piece of gritted-teeth goodwill do the words “apology” or “sorry” appear. You know who wouldn’t be cool with this? George Costanza.