Download Oberhofer’s ‘HEART,’ Learn Everything You Need to Know About His Debut LP 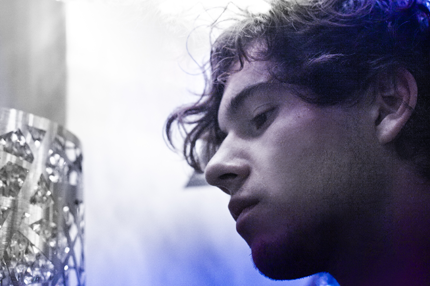 Indie-rock wunderkind Brad Oberhofer won notice over the last 18 months or so for a series of spiky, lo-fi guitar-led singles. Ah, the young change so quickly. “HEART,” from Oberhofer’s March 27 debut LP Time Capsules II is a radical — and lovely — step forward. Produced by Steve Lillywhite (U2, Peter Gabriel), the track is a kaleidoscopic piece of chamber-pop, featuring pianos, harp, strings, and whirring keyboards, with Brad’s heartfelt vocal floating over the circus below. It’s an intriguing teaser for the rest of the forthcoming full-length, and you can stream it — and download it — here now.

About that full-length: Watch Oberhofer discuss the making of the disc (and the birth of his career) in a short doc by Jay Buim while perusing its track list and tour dates below (also, take a look at Time Capsules II’s cover, by the Black Keys’ art director Michael Carney). As Oberhofer explains, “I had been in love with a girl for my entire adolescence. I was leaving for college and she had to leave town before I left for school. So I made it my mission to finish writing a song about her and recording it.” The result: His first song. While superproducer Lillywhite gives Brad some studio tips (“Just think sex”), Oberhofer munches on oranges and chocolate, makes a few sonic suggestions regarding paying a toy piano upside down, and reveals, “This record is mostly an example of who I was when I wasn’t aware you could fall in love with more than one person in this world.”

10 Albums You Can Hear Now: Run the Jewels, Daughn Gibson, The-Drum, and More