This partial rendition has been four years in the making 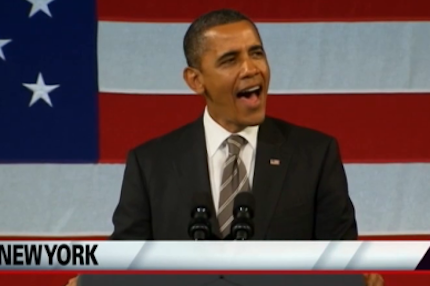 Here’s a theory: There exists, within all of us, some deep, latent, and heretofore unfulfilled urge to see President Barack Obama perform a pop song.

Way back in 2008, when everyone wanted “hope” and “change” right now even as the economy was on the brink of collapsing, you might have imagined that happening most naturally within a hip-hop context. After all, no less an authority than Jay-Z had even referred to himself as “the ‘hood’s Barack.” But check out Obama’s classics-skewing iPod playlist — part of what endeared the junior senator from Illinois beyond the base is, beneath the cool demeanor and flashy grin, his old-fashioned, fatherly squareness.

So Obama would have to be a singer, not a rapper — or, OK, maybe a rapper who also sings, like Drake or Nicki Minaj, but let’s not get ahead of ourselves here. In recent weeks, an enterprising YouTube user tried to sate our need for Obama the pop star by heavily editing video clips of the president’s speeches to make it appear as if he’s robotically talk-singing Lady Gaga’s “Born This Way.” Which, OK, was funny, in a Speak & Spell sort of way.

But then last night, Obama appeared at the historic Apollo Theater in Harlem. And, as you may have seen by now, he sang a little bit of Al Green’s “Let’s Stay Together.” And it was awesome.

Relive the moment below, and imagine how glorious it would be to hear the R&B-smoothie-in-chief sensitively croon the entire thing. War is over (if you want it), Mr. President!