'We didn't want to put out any wack shit' 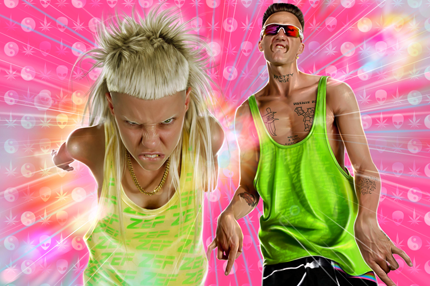 The new single from South African rave-rap oddballs Die Antwoord might be called “I Fink You Freeky” but, with the possible exception of their beloved Celine Dion, they’ll never find anyone else as freaky as they are. In talking about the group’s upcoming new album TEN$ION, MC Ninja explained that, “We tried to work with other people over and over but they couldn’t deal with our hardcore style.” Indeed, Die Antwoord struggled with their old label, Interscope, about the direction of the new album. (TEN$ION is being released on DA’s own ZEF imprint.) The main problem? “[Interscope] kept pushing us to be more generic,” says his co-MC Yo-Landi Vi$$ER. And, really, who wants a generic Die Antwoord?

The group’s desire to maintain the freaky-freshness of their 2010 debut, $O$ fueled the making of TEN$ION. “For [the new album] we wanted to maintain the same hunger, intensity, and focus as we had on our first album,” says Ninja. “Some people blow up and then flop on their second joint. We just wanted to keep up our tension so that the new album felt like an exact continuation of $O$. We put a lot of pressure on ourselves to maintain the same fucking manic edge.” Or, as Vi$$er puts it, “We didn’t want to put out any wack shit.”

You can judge for yourself whether Die Antwoord achieved their goal when TEN$ION drops on February 7. Two days later, Ninja, Vi$$er, and DJ Hi-Tek will kick-off their American tour at Philadelphia’s Trocadero Theatre. We suggest giving the single a listen. A little homework never hurt.