Blake Shelton and the Band Perry will join the Rhinestone Cowboy 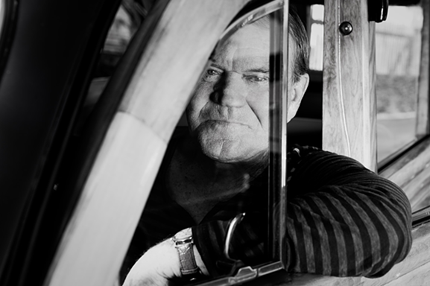 “You can’t assume a man isn’t a poet,” said Jimmy Webb, the songwriter behind Glen Campbell’s classic “Wichita Lineman,” in a recent interview about the 1968 hit that secured the countrypolitan singer’s legacy. “And that’s really what the song is about.” Anyone who doubts there’s poetry in the high, lonesome voice of Campbell, now 75 and staring down Alzheimer’s, will have a chance to see for themselves when he performs live at the 54th Annual Grammy Awards.

The former host of TV’s The Glen Campbell Goodtime Hour will sing backed by two current Grammy nominees: Blake Shelton, who’s up for Best Country Solo Performance and Best Country Album, and the Band Perry, who are vying for Best New Artist against Bon Iver and Skrillex. Campbell, who owns five Grammys and a Lifetime Achievement Award himself, is in the midst of a “Goodbye Tour” that’s currently set to run through a June 30 date in Bayfield, Wisconsin. His Ghost on a Canvas, one of SPIN’s 20 Best Country & Americana Albums of 2011, includes songs by Paul Westerberg, Jakob Dylan, and Guided By Voices’ Bob Pollard.

Check out Campbell’s elegiac, Abbey Road-strolling take on GBV’s “Hold on Hope,” along with a vintage “Wichita Lineman” rendition from The Smothers Brothers Comedy Hour, below. So far other high-profile collaborations announced for the February 12 Grammys ceremony include Coldplay with Rihanna and Kelly Clarkson with Jason Aldean. Paul McCartney, Foo Fighters, Nicki Minaj, and Taylor Swift are also confirmed for the event, hosted by LL Cool J. Hey, Campbell had a hit with songwriter Webb’s “By the Time I Get to Phoenix,” and Public Enemy blew minds with the, ahem, unsentimental pro-Martin Luther King Jr. Day protest “By the Time I Get to Arizona,” so it’s only logical to assume the Rhinestone Cowboy is down with turn-of-the-’90s hip-hop.