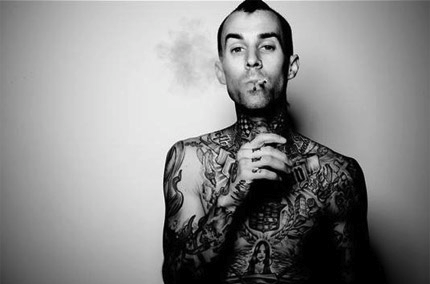 Travis Barker has inadvertently stepped into Tommy Lee territory. Photos showing the Blink-182 drummer’s, ahem, drumstick have surfaced online, and TMZ reports that Barker’s attorneys have already sent a cease and desist letter to a gossip website over the nude images.

MediaTakeOut.com originally posted the photos yesterday without identifying the musician. (Text on the images directs viewers to visit the website “to find out which tatted rocker this is.”) It didn’t take long for Barker’s tattoos to give him away — and for the pictures to start making the rounds online.

The images date back more than five years, TMZ reports, citing “sources close to Travis.” The sources are quoted as saying the pictures were “private and never intended for public viewing or to be seen by anyone else.” Barker has retained Evan Speigel, a partner at Los Angeles entertainment law specialists Lavely & Singer, TMZ’s sources say. Spiegel’s cease and desist letter reportedly charges MediaTakeOut with “unauthorized use of private photos.”

Barker, who survived a plane crash in 2008, released a solo album last year, Give the Drummer Some. He also toured with Blink-182 in 2011 in support of the pop-punk pioneers’ first album in eight years, Neighborhoods. He has worked often with figures from the hip-hop world, including a TV appearance in December backing Alabama rapper Yelawolf on Conan.

Sure, all the indecent exposure might hurt right now, but luckily for Barker, he’s indestructible.