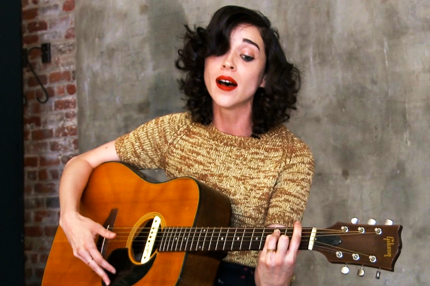 In May of last year, St. Vincent leading lady Annie Clark played a toothsome and terrifying rendition of Big Black’s “Kerosene” as part of an evening at New York’s Bowery Ballroom dedicated to Michael Azerrad’s indie rock tome Our Band Could Be Your Life. And on Saturday night, on that very same stage, Clark made an appearance during the Portlandia tour’s Manhattan stop with another fitting cover in hand: Pearl Jam’s “Black,” both because this was a comedy show and because, as you’re probably aware, Peej frontman Eddie Vedder put in another fine bit of acting work (playing himself, again) for the premiere episode of the IFC series’ second season. This time out it was just Clark on her own with a guitar and some Vedder-like vibrato, the best moments coming in the coda, during which she pleaded with the crowd (a wonderfully uncomfortable, East Coast analogue to the demo the show lampoons) to not “fucking make me sing this all alone,” and “keep fucking singing, this is really embarrassing.” But why?! (Clip via Pigeons and Planes).