Antony and the Johnsons’ ‘Swanlights’ Show, By the Numbers

Home » New Music » Reviews » Antony and the Johnsons’ ‘Swanlights’ Show, By the Numbers

Last night at Radio City Music Hall, Antony and the Johnsons performed Swanlights, a one-night-only performance art exhibition commissioned by the Museum of Modern Art.The nightfeatured interpretive dance, a laser light show, and a stage design that ought to have its own wing of the actual MoMA, not to mention frontman Antony Hegarty performing (in a breathtaking — as usual — white gown) selections from all four Antony and the Johnsons albums (2000’s self-titled, 2005’s I Am a Bird Now, 2009’s The Crying Light, and 2010’s Swanlights) with the assistance of the 60-piece New York Symphony Orchestra, light artist Chris Levine, lighting designer Paul Normandale, and set designer Carl Robertshaw. Having received high critical acclaim in the music, performance art, literature, and visual art fields — including a Mercury Prize for Bird and near-worshipful praise from collaborators like Lou Reed and Laurie Anderson — the two-hour event was predictably luminous. And totally sold out.

SPIN was in the house, gawking at Björk and keeping track of the night by the numbers: 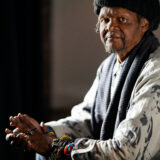 Dude-Earrings In Attendance: Too many to count

Backdrop Layers Revealed Throughout the Performance, Including the Curtain: 5

Lasers Used Throughout the Show: Approximately a bazillion, give or take

Times Antony Tapped the Conductor on the Shoulder to Ask Him to Restart a Song: 1

Times Tilda Swinton Held Up Her Arms Like Football Goalposts During a Round of Applause: 1

antony and the johnsons, bjork, michael stipe, We Were There