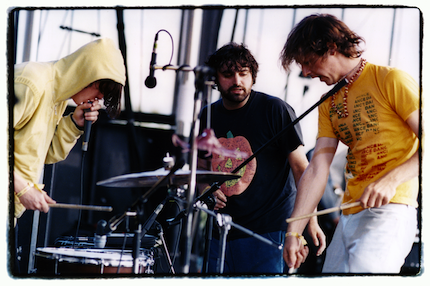 Merry pranksters Animal Collective are about to start work on their follow-up to 2009’s massively acclaimed Merriweather Post Pavilion. The band has revealed it will hit the studio to record its next effort in roughly one week. In the meantime, they’ve posted a video that collapses the entirety of their entire recording session for 2007’s Strawberry Jam into nine hypnotic minutes.

Animal Collective’s experimental urges have taken the group some magnificent places musically, but you don’t have to be a philistine to concede that sometimes their need to innovate can get ahead of them. Titled “Strawberry Time Lapse,” this clip is brilliant in theory: “[Strawberry Jam engineer] Scott Colburn had a great idea when we were recording” the album, the band explains. “He set up a video camera to take short clips of footage once a minute for the whole time we were in the studio. This is the unedited result.” A time-lapsed studio document! Not bad, right?

In practice, however, the results are a bunch of disjointed Strawberry Jam snippets that sound like a CD player on fast forward set to choppy, dimly lit footage of the Animal Collective dudes bashing away on drums, twiddling with knobs, or gathering around a mixing board. Curious musos might be able to discern a few technical details they can use in their own setups, and bored stoners will probably be able to space out to it, but it doesn’t exactly reward focused, workaday viewing — although the endearingly goofy moments when band members look directly at the camera are definite highlights. This is how your “Peacebone” sausage is made.