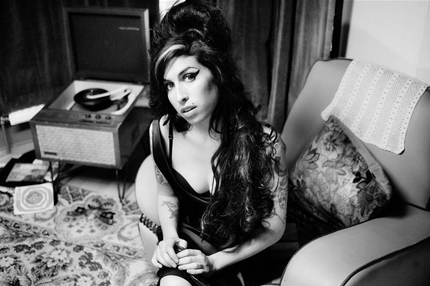 Amy Winehouse, or at least a fashion collection inspired by the late British singer, has hit the runway in Paris. Jean Paul Gaultier’s haute-couture show in Paris yesterday involved heavy eye makeup, towering beehives, and cigarette-smoking models. A live barbershop quartet even apparently sang “Rehab.” And guess what? As the British edition of the Week points out, fashion critics are split on the new spring-summer line.

Was the collection a fitting tribute to Winehouse, who was found dead last summer in her London apartment at age 27? Well, the New York Times’ fashion critic praised the designer for summoning up her “chaotic essence in a marvelous show,” so, maybe? “Gaultier did Amy proud,” agreed the Daily Telegraph. Then again: “No, no, no!” typed a critic at the Independent, arguing Gaultier’s effort “hits all the wrong notes.”

If nothing else, it’s comforting to know the rarefied realm of high fashion isn’t so different from the mass-appeal world of pop music, after all. Hey, somebody was bringing down those Metacritic scores for Winehouse’s Back to Black. Check out our review of Winehouse’s posthumous album Lioness: Hidden Treasures here.