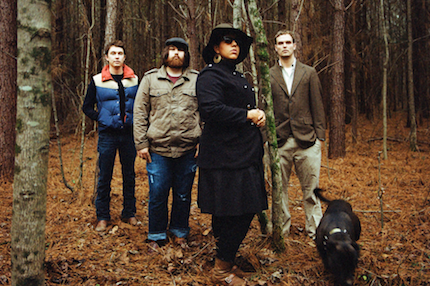 Alabama Shakes were one of SPIN’s 30 Can’t Miss Acts at CMJ 2011. Now, the, yes, Alabama-based roots-rock quartet is set to release its debut album, Boys & Girls, on April 10 via ATO Records, and you can listen to the Muscle Shoals-steeped first single “Hold On” below.

Singer-guitarist Brittany Howard’s deeply emotive vocals are part of what has helped this band turn so many heads, and she’s right out in front on the new song, backed by Southern-fried licks and the icky thump of the rhythm section. “C’mon, Brittany,” she encourages herself, but it isn’t the words that count here as much as how they’re delivered.

Alabama Shakes have been getting plenty of outside encouragement, too. They’re kicking off a series of live 7″ releases from Jack White’s Third Man Records with a two-song single, recorded last fall at Third Man’s Nashville studio and arriving later this month. The band is set to make its TV debut on February 7 on Conan, following a January 24 appearance on KCRW’s Morning Becomes Eclectic and a session for NPR’s World Cafe that airs on January 26.

As for Boys & Girls, Alabama Shakes recorded the album at the Bomb Shelter in Nashville, producing and mixing it themselves. The crew promise “swampy dirty South rock, blues, and soul delivered with punk rock fervor.” Check out the track list below, and visit Alabama Shakes’ Facebook page for tour dates.