The Year in Top 40 Radio Crammed Into Four Schizophrenic Minutes

If 2011 was a song, it'd be 'We Found Love While Rolling in the Deep and Dancing Till the World Ends' 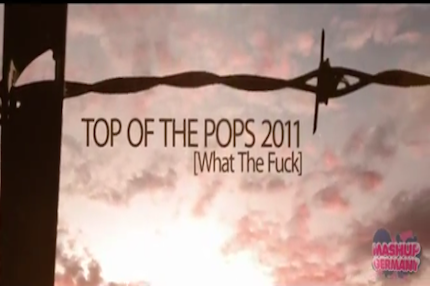 What would it sound like if you took every Now! compilation released in the past 12 months, threw them into a trash compactor, and smashed them into one MP3? A German YouTuber named Panos T decided to find out, and it sounds like an over-caffeinated Four Loko mash-up of Top 40 radio in 2011 (via Buzzfeed). Britney Spears’ “Till the World Ends” is the pulse throughout — even though it only peaked at Number 27 on the German singles charts — while Rihanna’s “We Found Love,” “Moves Like Jagger,” and Adele’s Grammy-dominating “Rolling in the Deep” get co-starring roles. And yes, the only rapper to make this 2011 pop compilation is Snoop Dogg. The Doggfather is timeless.

Since this remix comes from Germany, there’s also a handful of tracks here that U.S. citizens have probably never heard, like Avicii’s “Levels,” Aura Dione’ “Geronimo” (huge in Denmark!), and Sak Noel’s “Loca People.” Lady Gaga, who released roughly 45 minutes worth of music videos this year, is reduced to a blink-and-you’ll-miss-it “Judas” cameo. In fact, Beats by Dre headphones make more appearances (1:38, 2:28) than the Fame Monster. So “Top of the Pops 2011″ isn’t exactly culturally accurate, but it does sum up what was played at clubs and weddings in Berlin this past year.