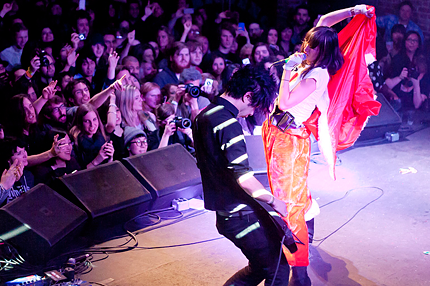 “The world is a fucking unstable place,” Tunde Adebimpe grumbled into his microphone Friday night in Brooklyn. It wasn’t a random complaint: TV on the Radio’s frontman was onstage with side project Stabbing Eastward at a benefit for local DJ Jonathan Toubin, a well-known New York personality who was the victim of a freak accident in Oregon on December 8. Jon Spencer led the crowd in a “Jon-a-than” chant near the end of Heavy Trash’s swaggering punkabilly set as concertgoers picked up I Heart JT T-shirts to help pay for Toubin’s mounting medical bills. And nearly two hours into the Brooklyn Bowl benefit, Karen O took the stage in a full Santa Claus suit to the chugging beginning of “Rockers to Swallow.”

The Yeah Yeah Yeahs played seven songs — their longest appearance in New York since a pair of exclusive 10th anniversary shows in September 2010. Before that, their last official Stateside It’s Blitz! tour date was September 29, 2009 at Brooklyn’s Music Hall of Williamsburg, just a few blocks away from Friday night’s concert. But the trio, who recently collaborated on Karen O’s psycho-opera Stop the Virgens, instantly demonstrated they’re in fighting shape, nimbly ripping through their catalog with the live-wire energy they’d brought to their earliest club shows.

Karen O spat a fine mist into the air to herald the beginning of Fever to Tell opener “Rich” and dropped to the floor screeching “no-good dick!” to end a raucous “Black Tongue.” She shook herself into a fury during Cramps cover “Human Fly” and tossed her Santa coat into the crowd to “Y Control.” Nick Zinner silenced the room with the first notes of “Maps,” and all bowling ceased on the venue’s lanes as a bearded Brian Chase pounded out the beat and Karen gave a specialized variation on the song’s traditional opening monologue, “This is the Yeah Yeah Yeahs’ love song! This song goes out to Mr. Jonathan Toubin and we’re sending him all of our looove!”

It took a lot — a catastrophic event — to get the YYYs back onstage, and the trio seized the opportunity to demonstrate how life-affirming their throat-grabbing rock’n’roll can be. “We’re so fucking happy to be here, man,” Karen O added before the trio trotted backstage. They returned to leave the crowd on an upbeat note, closing out the show with a giddy “Heads Will Roll.” A stage diver soared into the crowd and Karen O jumped around wearing a giant grin. The benefit raised money for Jonathan Toubin, but this set raised fans’ hopes that the Yeah Yeah Yeahs will get themselves back in the studio — and on the road — as soon as possible.

Caryn Ganz
Tags: We Were There, Yeah Yeah Yeahs