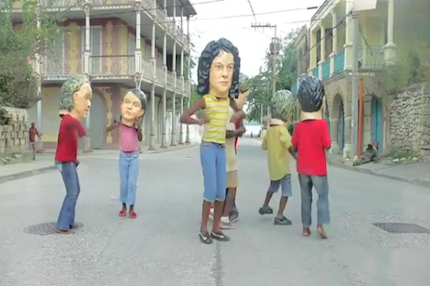 In August 2010, Arcade Fire found a way to make a music video truly hit home, teaming with a crew of tech geniuses to embed images from viewers’ childhood hometowns (via Google maps) into their clip for “We Used to Wait.” Over a year later, the band is trying to get fans to experience their music in a unique way once again — this time creating an “interactive” clip for “Sprawl II (Mountains Beyond Mountains),” the “Heart of Glass”-bouncy standout from last year’s ambitiously apocalyptic The Suburbs. Wave your hands at your webcam and see what happens here.

To get some inspiration, watch Arcade Fire’s Régine Chassagne get her groove on in the alternate “traditional” video for “Sprawl II.” Or watch the bobble-headed band members hum Michael Jackson numbers and frolic in the streets in a brief introductory clip. Shouts a papier-mâché-enhanced Arcade Fire-r, “Grab your crotch!” (via Pitchfork).