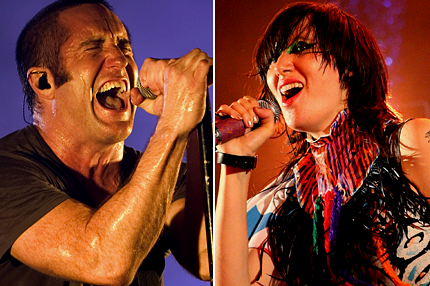 “I plead total ignorance to Led Zeppelin,” Karen O recently told the Sun. “I didn’t even hear the name right when it was asked. I thought they said the ‘The Pilgrim’ song and I was like, ‘Wat’s that?’ Yeah, I know, it’s pretty embarrassing.” And yet it’s a near-perfect place to start when covering a song by a band as obsequiously worshipped as Led Zep.

Karen O sings lead on Nine Inch Nails’ Trent Reznor and songwriting partner Atticus Ross’s electronic overhaul of the Led Zeppelin III original. Of course, the track is part of Reznor and Ross’ just-released soundtrack to director David Fincher’s upcoming film remake of Stieg Larsson’s bestselling Swedish novel The Girl With the Dragon Tattoo. And now, as Pitchfork points out, the NIN-ified Zep rocker has some trippy visuals, courtesy of Fincher himself.

It’s hard to make out much from the clip, which acts as yet another trailer for the Dragon Tattoo film. Through a flickering, pixelated greenish tint that suggests we’re watching on an early computer monitor or one of those old TVs that still actually have separate dials for VHF and UHF, we see a variety of bizarre and disturbing images. “So now you better stop, and rebuild all your ruins,” Karen O howls, in a rare moment of clarity, over the viciously sculpted electro-rock din.