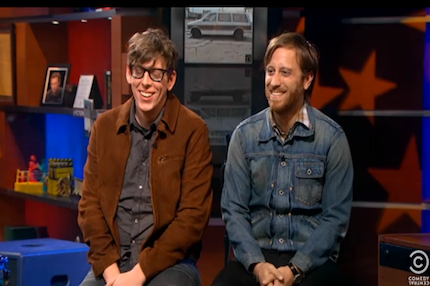 The Black Keys stopped by The Colbert Report once again last night to play music from their pedal-to-the-metal new album El Camino. Though host Stephen Colbert didn’t challenge them to a sell-out-a-thon this time, his fake-but-not-really interview generated actual revelations.

“I’m a huge fan of you guys,” the Comedy Central comedian-pundit acknowledged. That was only after he welcomed the band’s singer-guitarist Dan Auerbach and drummer Pat Carney to “the Grammy Club” (Colbert, a Grammy winner himself: “Do you guys need need any tips on like maintenance or anything?”) and got the guys to reveal they basically pulled the title El Camino out of their trunks (Auerbach: “We saw an El Camino, and we were like, ‘Hey, why don’t we call the record El Camino?”). Colbert also solicited a few thoughts on the Black Keys’ hometown of Akron, Ohio (Carney: “There’s a lot of cheeseburgers there”). Oh, and the blues-rockers demonstrated what their album sounds like for the viewers at home watching on mute. Check out the whole thing below while flipping through photos of the band’s NYC album release gig.

After the interview, the Black Keys performed El Camino’s viral video sensation, “Lonely Boy.” The five-piece setup looked much the same as for last weekend’s Saturday Night Live gig, but it’s pretty hard to go wrong with this taut, funky rock’n’roller. As an online exclusive, the band played another El Camino recurring from SNL, the stomping, bluesy “Gold on the Ceiling.” Watch both performances below, and while you’re waiting for the clips to load, consider these words of wisdom from Colbert himself: “You guys are on a rocket ship to the moon right now. This time last year you were Beardy and Glasses, the rock’n’roll guys; now you’re the Black Keys, triple Grammy winners.”