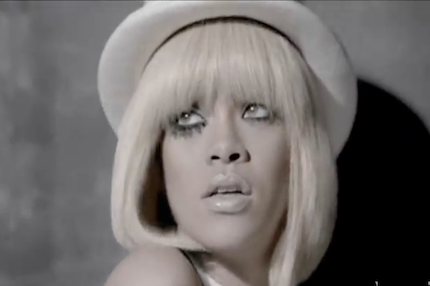 With all the rape and ultra-violence, Stanley Kubrick’s 1971 movie adaptation of A Clockwork Orange seems an unlikely match for a lilting, lighter-than-air love ditty from Rihanna that basically takes its chorus lyric from pre-tabloid Whitney Houston. Then again, Kubrick’s film sets a scene of savage cruelty to its bowler-hatted protagonist crooning “Singin’ in the Rain,” and Rihanna’s previous Talk That Talk clips, for “S&M” and current eight-week chart-topper “We Found Love,” haven’t exactly shied away from controversy, either. So when, in director Melina Matsoukas’s new video for “You Da One,” the Barbadian pop bad-girl writhes around sensually wearing the film’s signature headgear and, at one point, even eye makeup, it makes just about as much sense as anything else in this topsy-turvy year. Lyrics pop up on the screen as Rihanna confidently coos them: “You da one that I think about always.” What, did you expect those thoughts to be pure? (Via Just Jared.)