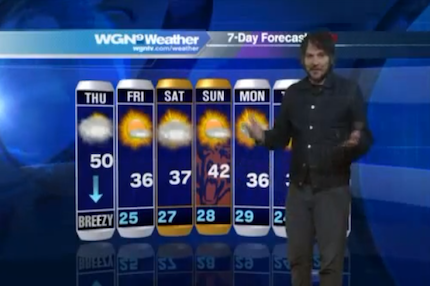 This morning, on Chicago’s WGN morning show, Jeff Tweedy made his debut as an awkward, self-deprecating weatherman. In the span of a minute, the Wilco frontman managed to ruin breakfast with a doomsday joke, riff on viewers’ literacy, and throw his palms skyward no fewer than ten times —all while the band’s “Shot in the Arm” played in the background.

Dressed in a button-up jean shirt with one hand jammed into his front pocket, Tweedy was precisely the opposite of the bald, straight-laced forecaster who tasked him with reporting the week’s weather.

“Seven days seems kind of optimistic to me,” he said. “It looks pretty good. I don’t know. Things could be worse?”

Acknowledging that his improvised script might raise a few eyebrows he offered, “I’m sure you’re just getting up, you’re wondering what to wear today. The last thing you want to see is a guy from Wilco doing the weather. You’re probably thinking some virus has swept through the WGN studios and there’s only a few of us left to man the controls.”

Luckily, both for his fans and the Windy City’s breakfast television audience, Tweedy isn’t considering a career change. The band, currently in the middle of a five-night run of shows at different venues around their home city, were on the WGN set to play a pair of songs from their Grammy-nominated album, The Whole Love. In short, don’t quit your day job, dude.