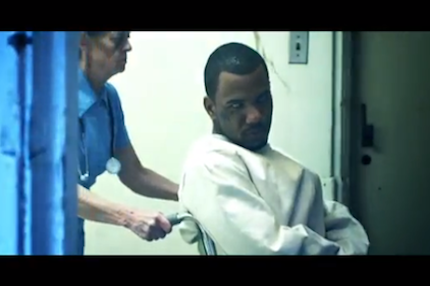 The video for Game’s “Martians Vs. Goblins” has arrived, just in time to rekindle the ridiculous beef between Tyler, the Creator and Bruno Mars. (If you’re unfamiliar with the not-nice things Odd Future rapper said about Mars, hit play now.) The video finds a straitjacketed Game entering the dark, gore-obsessed world of Odd Future, which is essentially the same One Flew Over the Cuckoo’s Nest universe previously populated by Eminem in his “3 a.m.” video. Although Lil Wayne features on the song as the titular Martian, the otherworldly rapper doesn’t appear in the video itself; instead, all his lines are given to assorted patients in the asylum. (Surprisingly, this “Niggas in Paris” fan was not cast.) But the craziest thing about this video: Game is wearing a shirt with the chorus written on it.