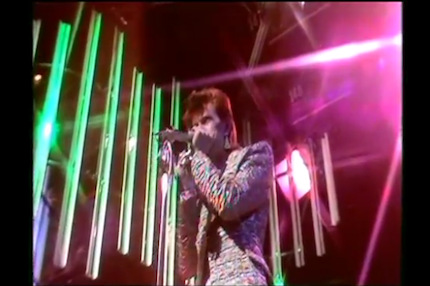 A David Bowie television performance that no one has seen in three decades, and that Americans have never seen at all, hit the web today. As the story goes, Bowie as his red-haired Aladdin Sane persona visited U.K.’s long-running music program Top of the Pops on January 3, 1973 to showcase his then-new single “Jean Genie.” The performance aired only once, and the tapes from that TOTP episode were placed in the BBC vaults… where they were ultimately erased so the network could reuse the tapes, the BBC admits.

It was believed that this “Jean Genie” was lost forever, but recently, a cameraman named John Henshall revealed that he made a an additional copy of the performance for himself. That copy is what you’re watching here, a slightly extended version of the Aladdin Sane cut backed by the Spiders From Mars. This rendition debuted earlier today on the BBC’s Top of the Pops Christmas Special, but thanks to the YouTube, we can all now share this unearthed Thin White Duke clip, which marks the second significant Bowie find in 2011.