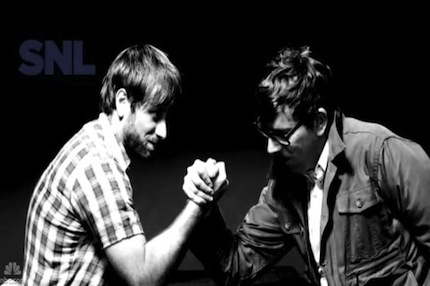 Saturday Night Live occasionally invites a musical guest to also fill the role of the host, but we’ve never heard of a band performing on the show twice in the same year. Then again, the Black Keys brought in high ratings when they performed on SNL’s first episode of 2011, hosted by Jim Carrey, so why not bring ‘em back before they head out on their arena tour with Arctic Monkeys?

On Saturday night, increasingly bearded singer-guitarist Dan Auerbach and drummer Pat Carney teamed up with a bassist and keyboardist to tear through “Lonely Boy” and “Gold on the Ceiling,” two of the more scorching songs from their relentless new album El Camino. “Lonely Boy,” in particular, appeared to lose a step on the show’s often-tricky stage, but then again, hearing a song without being able to watch the most endearingly goofy dancer this side of Napoleon Dynamite will do that.

Hosted by the ever-awesome Steve Buscemi, this weekend’s SNL had music on its brain even when the Black Keys weren’t performing. The show’s recurring sketch The Miley Cyrus Show poked fun at the young singer’s professed love of weed, complete with a reference to the two-in-one fast food outlet that made Das Racist unlikely rap stars. Plus: On “Weekend Update,” Seth Meyers mentioned Hanson’s recently announced brand of beer, “Mmmhop.” Once upon a time, those guys were performing on the show, too.