See the soul diva's performance of 'Love is a Losing Game,' from the upcoming doc 'Amy Winehouse - Other Voices: When Amy Came to Dingle' 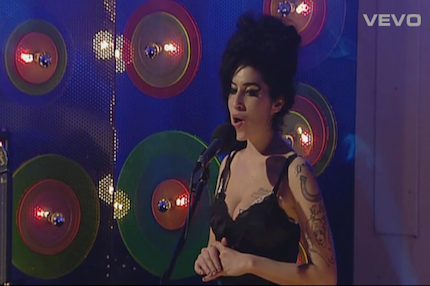 In December 2006, Amy Winehouse’s breakthrough album Black in Black was two months old. The retro-soul singer, who died tragically this summer due to what officials have ruled as excessive alcohol consumption, was only 23. That’s when, almost exactly five years ago, she stopped by a 200-year-old church in Dingle, a small town on western Ireland’s remote and craggy peninsula.

Irish TV program Other Voices has put together a documentary, to be broadcast on BBC2 in early 2012, that includes an interview with the young Winehouse, who was then on the cusp of fame. The documentary also shows footage of the “Rehab” singer giving an intimate performance at St. James’s Church, built in 1807 in this town with a population of fewer than 2,000 people. An extended, 20-minute clip from the film was online early this morning, but as of this posting appears to be no longer available in North America — however, you should cut directly to the chase and watch a stirring performance of Back to Black ballad “Love Is a Losing Game” right now, below.

Winehouse’s concert in Dingle came an entire year before she released “Love Is a Losing Game” as a single, and there’s a gorgeous vitality to her performance, as if she, too, is still falling for the song, still unsure whether audiences will come along with her. There’s no denying her stark and emotion-wracked vocal, backed simply by jazzy electric guitar and electric bass. “Now the final frame,” the once and future star croons, her signature beehive, heavy eye makeup, and Monroe lip piercing all already in place. Utterly poignant.