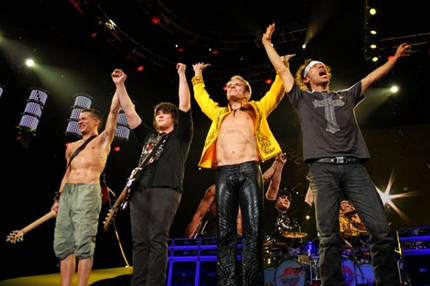 You really (don’t) got me: Van Halen’s promised appearance at the Grammy Awards nomination concert on Wednesday night failed to take place. Way back in early November, Grammy organizers not-so-subtly revealed the veteran rockers would be “the reuniting band” at the show, where they were supposed to make “a special live announcement” (read our full recap of the event). Well, they weren’t, and they didn’t.

While Recording Academy President Neil Portnow told Reuters he couldn’t confirm that Van Halen had indeed been the scheduled band, it’s hard to misinterpret a tweet like this one, from November 3: “Who do u predict the reuniting band will be @ #GRAMMYnoms? Does this hint make u wanna ‘Jump’ & ‘Dance the Night Away’?” The only shadow of a doubt in that tweet remains the inconvenient fact that original frontman David Lee Roth already reunited with Van Halen in 2007 — though that was without longtime bassist Michael Anthony.

Whoever this mystery band with the exact same hit song titles as Van Halen might have been, they might be the tiniest bit flaky. Artists, you know? Here’s what Grammy official Portnow told Reuters: “In the world of creativity, everything is fluid … there was the expectation that the artist involved and we would be ready to announce, but the artist was not quite ready. We were genuine about the intention and discussion (but) the time frame has moved.” Rock’n’roll can’t be contained within deadlines and schedules, maaan.

The no-show isn’t a particularly auspicious move for a band that recently signed a new record deal. The Hollywood Reporter broke the news last month that Van Halen had jumped to Universal Music subsidiary Interscope Records, leaving behind Warner Music after a 35-year run together. Get excited for the inevitable “reunion album” announcements — and ensuing release-date postponements.

All the more time to listen on repeat to Roth’s immortal, astounding “Runnin’ With the Devil” vocal track. AWHHH YEA–AAAAAAWH: