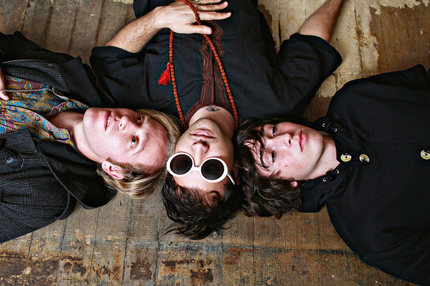 Psych-pop trio Unknown Mortal Orchestra were among indie rock’s rookies of the year in 2011 thanks to their catchy, fuzzed-out self-titled debut album. Six months after Unknown Mortal Orchestra first entered our lives and our iTunes, SPIN has your exclusive first look at the Portland-via-New Zealand band’s new music video for the UMO cut “Bicycle.”

In the grand tradition of 2011 muscle car movies like Drive and Bellflower, “Bicycle” stars a thrill-seeking blonde (model Sarah Dumont) who enjoys shoplifting in the convenience store, smashing things with a lead pipe, blowing up Twinkies, and countless traffic violations (but none committed on the titular bicycle). It’s like Rihanna’s “We Found Love” video, minus the MDMA but with a lot more criminal activity. The Michael James Johnson-directed video also features the most vibrant post-prod coloring this side of the Smashing Pumpkins’ “Today.”