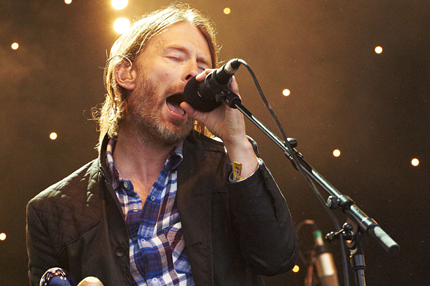 A little over a month after false rumors of a Radiohead concert at Occupy Wall Street brought new publicity to the protests, the band’s frontman has shown up in the flesh to support the movement. Thom Yorke, Massive Attack’s 3D and UNKLE producer Tim Goldsworthy put on a performance in east London last night to raise money for the worldwide Occupy demonstrations. As the Guardian reports, the event took place in the basement of an abandoned facility owned by the huge Swiss bank UBS, for an invited audience of 100.

Organizers reportedly say the concert, held as a “thank you” to the movement from the artists, will soon be released via the label Occupation Records. In a practice Radiohead popularized a few years ago with the album In Rainbows, the album will be sold on a “pay what you want” basis. The funds would go to the U.K. Occupy movement and other demonstrations globally. Watch footage from the event here.

Massive Attack have been active in their support of the Occupy movement. The iconic trip-hop group even set up a SoundCloud page devoted to Occupy Radio, which includes mixes and tracks meant to back the efforts. Check out 3D’s Occupy Radio mix below. UNKLE’s Goldsworthy, who also performed at the event, used to be LCD Soundsystem frontman James Murphy’s partner in the label and production duo DFA.

Previously, Neutral Milk Hotel’s Jeff Mangum performed at Occupy Wall Street. Kanye West and Russell Simmons made an appearance, while Jay-Z briefly attempted to release a T-shirt influenced by the protests. Surprising no one, Rage Against the Machine’s Zack de la Rocha and Tom Morello have also done their part, probably wondering what the hell took everybody else so long to catch up with them.