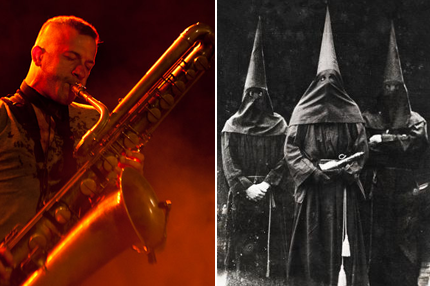 20. The Necks, Mindset
The Australian ambient-jazz legends etch deep into their first piece of vinyl in a 22-year, 16-album career. Snail-paced trance-outs are replaced with the furious motion of a bustling commute, but they lose none of their mesmerizing hues.

18. Oneohtrix Point Never, Replica
Retrofuture synth ooze’n’wooze recollections of dystopias past — all made more tangible by actually sampling the ’80s commercials we’re supposed to be misremembering.

17. GuÃ°mundur Steinn Gunnarsson, Horpma
A pointillist st-st-st-st-stroke from an Icelandic composer whose Autechresque sense of rhythm blurs the lines between organized, random, and sheer madness. He makes a 27-instrument ensemble sound like rain falling on a Guitar Center.

15. Mika Vainio, Life (…It Eats You Up)
One half of Finnish electronic scuzz-constructors Pan Sonic makes his “guitar record.” Naturally it vacillates from digitally enhanced feedback experiments, steam-gushing industrial doom, Southern Lord-ready churn and even a dubsludge cover of the Stooges’ “Open Up and Bleed.”

11. Alva Noto + Ryuichi Sakamoto, summvs
The fifth and final collaboration between two titans of feather-soft improv, summvs stands as masterful as any of the previous four: Drowsy pulses, languid glitch-clicks, one-finger riffs, digital fuzz, and rainy-day drones intertwine into something as gentle as ambient music but as intensely focused as the best jazz.

10. Deaf Center, Owl Splinters
Norway’s Deaf Center are a pair of shadow-perched sound surgeons who have mastered the line where horror transforms into beauty. A majestic fusion of acoustic instruments, ghostly rattles, and uneasy hums, Owl Splinters is like a languid shot from Robert Wiene or Dario Argento painted in bowel-rumbling bass tones and brittle melodies.

9. Colin Stetson, In Concert: ATP Festival
New History Warfare Vol. 2, the actual studio album by the avant-garde crossover story of the year, is far too bloated with glossy production tricks and tacky neighbor Laurie Anderson peeking over the fence. Better to cop the saxophonist on this uncooked live bootleg from NPR’s All Tomorrow’s Parties recordings where you can truly hear this human asthma inhaler sweating bullets, gasping for air, and maniacally playing three notes at once.

8. Mick Barr; Hubble, Coiled Malescence
Hubble Drums
Mick Barr has been the Steve Vai of Steve Reich for more than a decade and on Coiled Malescence, his fingertip-frying fretwork lays completely naked and unaccompanied, a bleak gaze into a rubbed-raw void of repetition. Meanwhile, Brooklyn upstart Ben Greenberg of Hubble (full disclosure: Ben is such a close friend that I actually named one of the tracks on this album) uses the same tools, but with an ear for the blissful, earnest, and spacebound.

6. Blanck Mass, Blanck Mass
As one-half of Fuck Buttons, Benjamin John Power is no stranger to heart-stopping, neon-saturated, Crayola-scribbed joynoize. Here, he abandons the beats entirely for the familiar ooze of his sublime, goosebumpy drones.

5. Cultus Sabbati, Garden Of Forking Ways
A wooshing, immersive, screeching, heaving, feedback-soaked black magick ritual that has all the haunted textures of doom metal, black metal, power electronics, and dark ambient — but good luck filing this passionate blast with any of them. The liner notes include instructions for a ritual that involves sacrificing a salamander.

4. Israel MartÃ­nez, El Hombre Que Se Sofoca
Mexican sound artist Israel MartÃ­nez plays architect of a blustery universe of his own creation, cobbled from highly synthesized and distended field recordings. Construction work turns into a digital hellscape, playing children are swallowed by monster drones, a subway pulling into a station is distended into a earth-shaking roar.