The best and worst of musical talent across the worldweird web 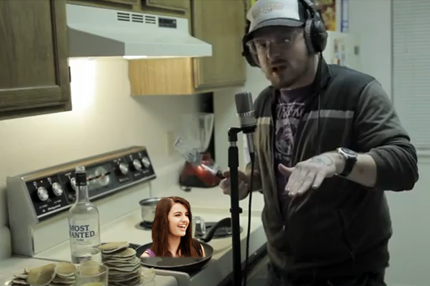 From pancakes with Mac Lethal to Pad Thai with the Vegan Black Metal Chef, SPIN serves up the indie-rock workout videos and homoerotic protest clips that made 2011 so OMG LOL.

10. Bon Iver Workout Trailer
The visual equivalent of Bon Iver’s polarizing soft-rock outro “Beth/Rest,” this DVD trailer from Justin Vernon’s personal trainer, Jeff Rogers, (starring the intermittently shirtless frontman), was originally thought by some to be a hoax. Because exercise is totally corny, right? He couldn’t possible like Bruce Hornsby, right? Could he?!

9. Mac Lethal Makes Pancakes
Kansas-bred online star Mac Lethal took a moment to work a Jerry Sandusky threat into a quadruple-time pancake tutorial-cum-demolition of Chris Brown’s “Look at Me Now.” At which point we just start coughing up chunks of our brain and giggling.

8. Thom Yorke X “Single Ladies”
2011 was the year Dancing Thom Yorke became a meme. And though it was inevitable that he would cross paths with Beyoncé, that this “Lotus Flower” splice job would exceed expectations like it did was a true gift.

7. Foo Fighters – Keepin It Clean in KC
When the Westboro Baptist Church called for a protest of the Foo Fighters’ August tour date in nearby Kansas City, Dave Grohl and Co. countered with a protest of their own: The Foos took to a Stars and Stripes-bedecked flatbed just outside the arena, where, donning wigs and fake facial hair and even cowboy boots, they serenaded the protest gallery with a homoerotic honky tonk number (sample lyric: “Think I’m in the mood for some hot man muffin”) and a speech they won’t soon forget. We won’t anyway.

6. Kreayshawn’s “Gucci Gucci”
Before we had Lana Del Rey, the Lord gave us Oakland film student/MC/Odd Future and Lil’ B associate Kreayshawn, whose “Gucci Gucci” video landed her a (reported) seven-figure deal with Columbia in June. Looking back, that line about Arby’s still holds up pretty well.

5. Sophia Grace Brownlee
For all of eight-year-old Sophia Grace Brownlee’s obvious talents, we related more with her five-year-old cousin, Rosie. That would be the tinier one on the left who’s dancing in place and mouthing “Super Bass” by Minaj’s far simpler chorus, even spacing out for a second before being snapped at by a parent from somewhere behind the camera. We get it.

4. Lana Del Rey’s “Video Games”
During a recent trip through this clip’s user comments, we found one very passionate Lana Del Rey defender insisting that the controversial singer-songwriter-pinup-poutstress wasn’t a member of the Illuminati. The fact that the argument even took place — about, it must be said, an artist with just a few songs to her name — is completely insane. But the interest (and fame) that it would require also signals some kind of land speed record amongst online brands gone pop. This is the video that started it all.

3. Taran Killam Loses His Mind to Robyn
In which the “featured player” (how can this continue to be the case?) unravels to the tune of Robyn’s “Call Your Girlfriend,” and, in the process, makes late nights in the SNL writing room look way more fun than just about anything we see live on Saturday night.

2. Vegan Black Metal Chef, Episode 1: Pad Thai
“Cut the tofu, turn the plate / Be careful not to cut too thin / Or else when you deep fry them, you will eat nothing but grissssstttle.”

1. Rebecca Black’s “Friday”
You were given a breakfast walk-through, a description of Black’s backseat whereabouts, a guest-rapped traffic update, more than one “we so excited”, and, in what became one of the most monumental choruses of the year, she (inadvertently?) made many of us consider what we love in and need from a pop song.